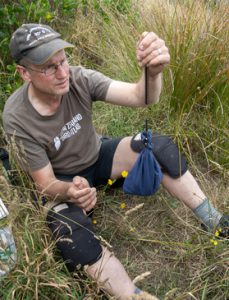 This is the Conclusion section of the 2019/2020 annual report about fluttering shearwaters on Mana Island. It was written for FOMI and DOC by Helen Gummer, 10 March 2020.

The full report details the results of fluttering shearwater monitoring efforts through 2019 and the outcome of the most recent 2019/20 breeding season.

A total of 92 adult fluttering shearwaters have been handled and identified on Mana Island since the reintroduction of the species commenced here in 2006.

This season, 81 adult fluttering shearwaters were captured. (Table 1) The adult population comprises approximately two-thirds known-age (translocated) birds all over 12 years old, and around a quarter of birds were hatched and raised on Mana I., i.e. are up to 8 years in age. Two new immigrants were banded bringing the total number of adults of unknown age lured to the island either by sound or the activity of other birds to nine.

This season, there were no first-time adult recaptures on Mana of birds that had been translocated there in 2006-08. However, one such new recapture of a 12.5-year-old bird (i.e. from the 2007 translocation cohort) was made on Matiu/Somes I. on 30 October 2019 (Shane Cotter pers. comm.). 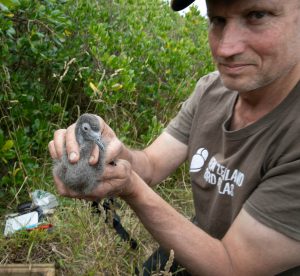 A total of 72 fluttering shearwaters transferred to Mana I. in 2006−2008 are now reported to have survived with 62 birds recaptured as adults on Mana I. and 10 birds found on Matiu/Somes I. (Table 2) We can now report a 48% survival rate of the 2007 cohort of translocated chicks, and 34% all three translocated chick cohorts combined so far exceeds that found for translocation projects involving any other seabird species in NZ, except for the Chatham Island taiko. The return rate of birds to Mana I. remains at 29% of all translocated birds.

To compare, we can now begin to report some impressive survival rates of birds that were hatched and raised on Mana I. since breeding commenced in 2010/11 including: 50% of all fledglings banded in the 2012/13 season; and, 54% of those banded in the 2013/14 season. So far, a total of 21 Mana-raised chicks have been recruited as adults into the Mana I. population since 2015, and one Mana-raised chick (from 2014/15 cohort) joined the colony on Matiu/Somes I. last year. (Table 3)

A total of 36 chicks fledged (Table 4); 29 at South Point and seven at the Northern Colony. This brings the total number of Mana-raised chicks fledging from the island to 182. The very high breeding success rate (90% of breeding attempts resulting in chicks fledging) this season can be attributed in part to favourable weather conditions through most of the incubating period, and to the good drainage of burrows during heavy rains in early December after most eggs had hatched. A gravel change implemented in all known breeding burrows at South Point in April 2016 (because the more active burrows were thought to have silted up with 10 years of use by breeding pairs) appears to have paid off. However, some burrows may be more prone to flooding for other reasons (location etc.), i.e. still flooded this year although gravel was replaced 4 years ago.

In addition, there has been very little evidence of conspecific burrow interference this season, with proportionally fewer failures at egg stage than in previous seasons. This indicates an approximately even sex ratio at the colony and few floating non-breeding birds causing disruption at established burrows.

TABLE 2: Total number of fluttering shearwater chicks translocated to Mana Island that have been recovered as adults between 2009 and 2020

NB Nine immigrants captured on Mana I. not included.

1 One chick died of aspergillosis; four chicks died through misadventure in blockaded pipes.

2 All chicks thought to have perished disappeared at weights below known fledging weight range and were not yet considered to be close to fledging.

3 Total chicks fledging include those that disappeared prematurely but still had potential to fledge successfully without further meals.