This weekend our group focused on Will Brockelsby’s flax weevil research project. There were 12 of us though Annemieke and Andrea doubled as part of the white-faced storm petrel feeding (WFSP) team. The feeding team were also at the Lockwood. We shared a meal with them.

Colin Miskelly outlined the flax weevil project so all present could appreciate the issues involved with the success/plague the weevils had created. Will outlined the night’s work.

The usual Friday survey of the 80 trial flax plants was to be carried out with the weevils seen to be collected. To follow, a total of around 800 weevils on adjacent areas was needed. These were found with little difficulty and transported to a table set up in the office building. Will, Andrea, Jenny (from Lincoln) processed around a quarter of these – attaching numbered and coloured tiny tags (used on queen bees). Containers with the tagged weevils were labelled with plant numbers and had unmarked weevils added. These were transported back up the hill and released. Colin, Richard G, Christine, Peter, Annemieke, Jaz, Adrian and Dale carried this out. This was pretty much completed by 2am.

A few showers Saturday morning delayed the setting up of the pitfall traps at the base of the trial flaxes. The group walked to the WFSP site to check out the burrows and site and take a look at the feeding process before proceeding to begin monitoring and opening up the pitfalls at the flax weevil site.

Night two began with a shared meal with the new WFSP feeders. The group we had eaten with on Friday night returned home on the back sailing. The round the group intros were done again. Cathy M told us about her background and the WFSP project so far. As usual there were lots of questions and huge interest in the discussion.

No plant survey was required Saturday evening so it was straight into collecting another 800 weevils for processing/packaging at the office. The whole weevil group was involved. Weevils were sourced this time from flax bushes near the top of Central Track. Another batch of weevils had tags attached, had non-tagged weevil added and were returned to and released onto their assigned flax bushes. The plentiful supply of weevils meant that all was finished around midnight.

On Sunday the beauveria fungus solution to be sprayed on selected flax plants was prepared at the Lockwood by Jenny. The pitfall traps at the base of the trial flaxes were monitored and closed by Peter, Christine and Colin – catches were recorded. This team was followed up by a team (Adrian, Richard, Jaz and Dale) with 4 litre watering cans – some with a diluted beauveria mix, some with plain water. To complete the morning’s work Colin turned on the 4000 L tank tap. This allowed irrigation of selected plants.

The volunteers made their way back to the Lockwood for lunch and to clean up before leaving. A tired and happy bunch climbed aboard the boat.

Hopefully, as a result of Will’s research project, a way will be found to keep the weevils in balance on Mana and these endangered insects won’t endanger the flax plants and flax dependent animals like the gold striped geckos. 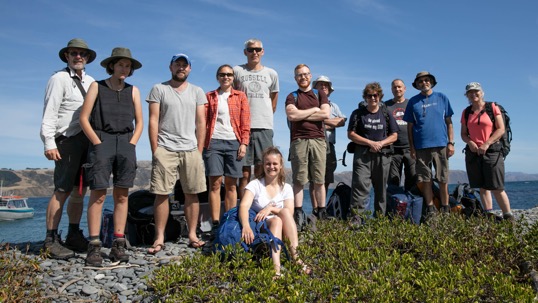 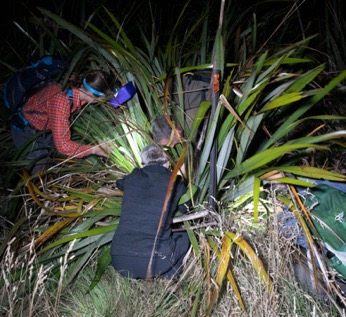 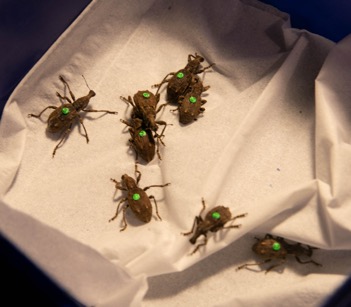 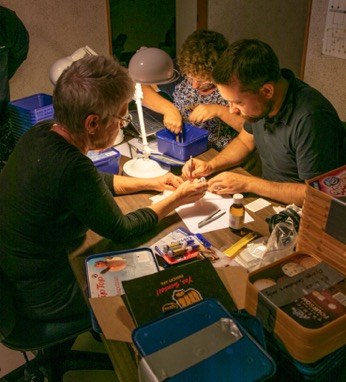 The team at work processing 800 flax weevils for monitoring. 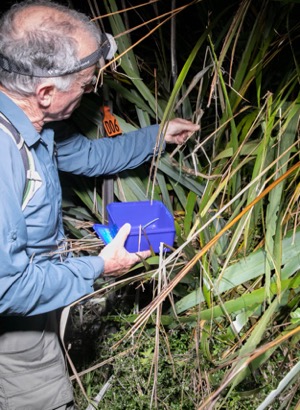