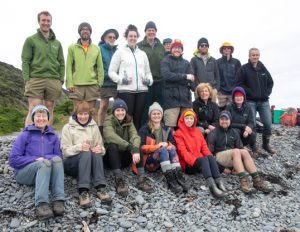 Philippa and Robyn completed the topping up of the WFSP burrows with fine beach gravel which Nick and Leon transported to the site. All burrow entry areas and pipes were cleared. Dale installed the missing number 99 burrow – there are now 100 WFSP burrows.

Richard, Linda and Allan managed to trace a number of plant species suitable for seed col
lection and propagation (listed in the Floral Diversity Report) – largely thanks to Allan’s memory of plantings in the early 2000s. The group also weeded and replanted.

David C continued his search for fernbirds, covering most of the island over the two days and coming up with a new pair. Twenty-four of the original 40 released have now been traced.

Colin worked tracing diving petrels at night – Sarah Jane assisted on Friday and Cherie on Saturday. By day Colin checked the old burrows north of the fairy prion site. Colin has suggested we plant some low growing scrub plants at the fairy prion burrow site to provide some shelter to entice birds back into the unused real estate. 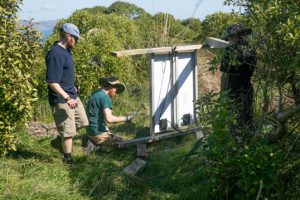 Allan, Philippa and Robyn visited the gannet colony Sunday. It was very breezy up there. They weeded, scrubbed off lichen with wire brushes and sand paper and sprayed the concrete birds with a bleach-based liquid. Nick and Dale have checked out paint to be used to touch up the birds for next work trip. 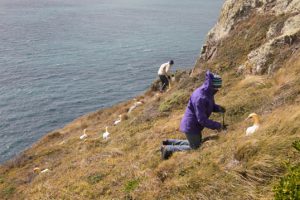 Robyn and Philippa spraying bleach mixture onto the concrete gannets.

Colin, Annemieke and Cherie spent Sunday doing 5 minute bird counts at the 20 stations around the island. A quick check of the sheets revealed bellbird and kakariki as the birds most commonly seen and heard around the island. Annemieke, Cherie and Richard have recently participated in the two-day 5 minute bird count course at Pukaha Mt Bruce. No flax weevil monitoring was done by the wider group over the weekend though Will and assistant Brook carried out measurement work at the site over the two days.

As always the group was great company, there was a huge amount of good food, there were not too many snorers and plenty was accomplished.