The trip over was quite bumpy for the group of 19 volunteers  with a strong northerly blowing. This didn’t stop around half of the group trekking up to the flax weevil trial site with Will to do 2-minute counts of fauna on the 80 mature flax plants in the trial that night. A second group, Dale and Richard, began the fluttering shearwater night monitoring at the South Point colony. 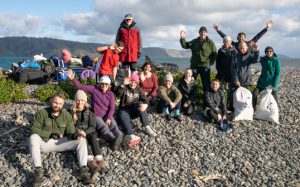 Saturday dawned cloudy with rain promised in the afternoon. After the health and safety briefing, the beach litter survey group led by Ben and John headed up the east coast to select their first survey site. Also in the group were Peter H, Jan and Rosemary. Annemieke, Jess, Chris and Brittany walked up to the ngahere gecko site to begin monitoring. Dale and Jaz headed to south of the top of Central track to mark out an access track to the west coast beach for the beach litter survey group. Peter S and Richard began lightwell monitoring of the revamped areas.

Will, Cathye, Rau and her sons Billy and Sid set up the pitfall traps at the flax weevil trial site. David C went searching for fern birds and filled sacks with gravel for the white-faced storm petrel site.

The rain gradually increased until it was steady in the afternoon. Few were brave enough to head out in this – the beach litter group however travelled to south of the Hole in the Rock, established a second site there and completed a second survey. Litter was taken back to base and categorised, weighed and recorded. 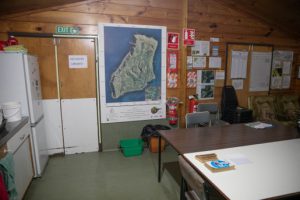 David C installed a giant version of Jaz’s map in the dining room/kitchen in the Lockwood. Its prime function is to record fernbird sightings. It can be written on and have pins pushed into it.

Dale, Annemieke and Brittany braved the conditions and headed up to the fluttering shearwater site in the evening. The rain had eased to showers but there was a strong, cold southerly at the exposed site. 13 birds were found and their band and burrow numbers recorded.

On Sunday the weather had improved – overcast early with a strong, cold southerly and very damp underfoot. The beach litter survey team attempted the testing track down to the west coast, abandoned this and made their way via South Point around to a suitable site around quarter way up the west coast. Jaz joined this group. After litter ‘audits’ litter was re-bagged ready for transport off the island. 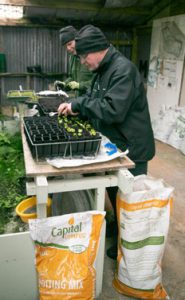 Will’s group plus Annemieke and Brittany cleared and closed the pitfall traps at the flax weevil trial site. Jess and Chris completed the ngahere monitoring (1 found), moved on to the now sun-drenched green gecko site and found a regular sunbathing. No speckled skinks were found.

Geoff and Dallas stood in for Nick and Gen. Evening meals provided plenty of variety, the group made great company and the cold, rainy weather was a minor hiccup. Gen had left some delicious homemade biscuits for the group.

Shane C arrived on the pickup boat on Sunday. He and Dale stayed on until Wednesday, to continue the fluttering shearwater monitoring. 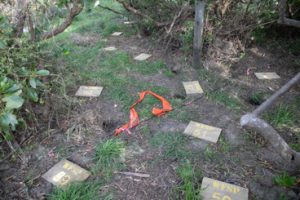 No birds were found in burrows on the Sunday and Monday nights. Tuesday night produced an overcast sky, a strong northerly and showers – this turned out to be ideal for the birds to return. 26 burrows had pairs in. 58 individual birds were found over the 5 nights. This looks great for the coming breeding season.