The weather relented and allowed us easy passage on Friday. Nick and Gen, Theo and baby Georgia were at the boat to meet us after their 2 month stint on parental leave. Nice to see them back.

Will led a large group to monitor fauna on the 80 flax bushes in his research project. Helen took Lucy up to the fluttering shearwater site checking out a few remaining burrows she suspected may have eggs or chicks.

Saturday was a beautiful sunny day. John, Ben, Riana and Richard M left early to begin the beach litter survey south of McGregor’s Rock. Litter collection at their other two sites + the audits of materials found were completed by the end of the day.

Helen and Andrea did maintenance at the fluttering shearwater site and carried out further prep work with the white-faced storm petrel burrows including pruning back spiky vegetation.

Shannan, Joy and Richard G assisted Will setting up the pitfall traps at flax weevil project site. Later Will and Richard checked the flow of the irrigation system in preparation for the summer release of adult weevils where some plants will be watered.

Annemieke, Cherie, Heather and Lucy made the most of the sunny morning trying to spot green geckos – no luck. They had set up the speckled skink pitfalls Friday night. Later the group installed 10 new traps at a site Richard G had spotted a possible ‘speckled’ last trip.

There was lots of pollen about and a few cases of hay fever. The group was not so active Saturday evening although Helen went back to the flutterers site to do further checks.

News came through that Sunday afternoon was not looking good for a safe trip home. Big winds and seas were forecast.

Sunday dawned cloudy and windy. Everyone set off on their tasks but with a warning that they may need to cut short and come back early. Trevor (skipper) was contactable around 9am. He agreed that predicted gusts of 45 knots was not safe and that he would pick up the group at midday. All leaders were phoned and everyone was back by 11.30.

Will and a small group managed to complete the flax weevil monitoring. Annemieke and the lizard group did a shortened ngahere gecko monitor and shut down their pitfall traps. Unfortunately no target lizards were found though a likely skink was spotted on the track near the new pitfalls.

The weather was pretty rough as the afternoon progressed. Just as well, we got back on the midday sailing.

Despite the early exit we covered most of our jobs well. It was great to see more new faces on the trip – young and old with plenty of skills to contribute. 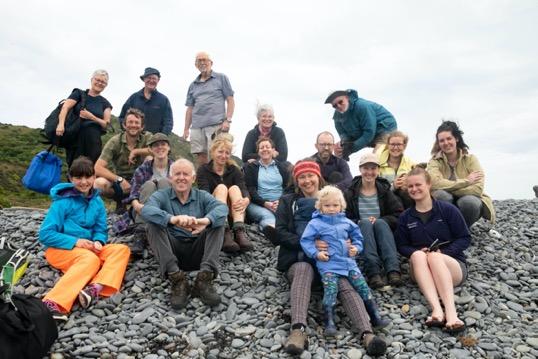