Mice vs Mana – a tale of success

Between 1989 and 1991 there was a major mouse eradication programme on Mana Island. At the time, Mana was the largest island in the world to be cleared of mice. Estimates ranged from 5 to 15 million mice!

This fascinating article in Forest & Bird magazine, published in May 1990, tells the story of the ambitious project to eliminate the plague of mice. It also recounts the early days of tree planting by volunteers.  The mice vs Mana story even featured in Time Magazine.

The efforts to eradicate the mice led to a question being asked in the NZ Parliament. A story about ‘marauding mice’ was in the Dominion newspaper in August 1989 with the headline Mickey taken out of mouse reports.  The Conservation Minister was asked by local Porirua MP Graham Kelly if they could be a problem for his electorate. The answer was no, and a local mousetrap industry was not required!

Just 18 months after the last mouse was caught, the island was declared rodent free.

Before the eradication programme began, 204 mice were caught in one night using a simple bucket trap at the back door of one of the houses on Mana Island, as shown in this photo. 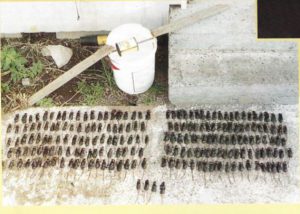 Mice caught in one night using a simple bucket trap. During the eradication programme from 1989-1991.