Late in 2020 Colin Miskelly proposed a one-off survey of speargrass weevils on Mana Island for early 2021. The expectation was for similar surveys to be undertaken occasionally (e.g. at 3–5 year intervals) to assess whether speargrass weevils are being impacted by the Beauveria fungus that is being spread by the flax weevils.

The background to this is that 41 Wellington speargrass weevils were released on Mana Island in 2006-07 about 650m south-south-west of the trig. Despite persisting on the island for 14 years, these large weevils are rarely seen. This weevil is a threatened species introduced to Mana as part of a targeted species management programme. So it is a priority to assess its current status on the island and, longer term, determine whether it is impacted by Beauveria fungus.

The initial survey was done over Waitangi weekend by a team involving a mix of Entomological Society and FOMI members. Colin said it went well. It involved groups searching steep coastal slopes near the speargrass weevil release site, marking every speargrass plant located within defined sectors, and recording all locations for  speargrass weevil and any feeding signs. While only three weevils were seen, their feeding signs were recorded on 147 plants spread over about 1 km. 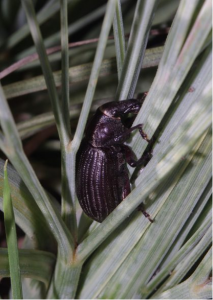 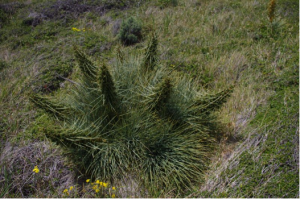