The story of Nigel the ‘lonely’ gannet on Mana Island

In case you haven’t already heard the sad news about our first resident gannet on Mana Island here is an update. There is a surprising upside to this sad story however… 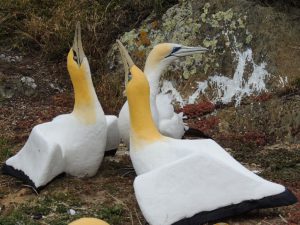 Nigel’s story – Nigel died in January 2018. He was found by the DOC ranger, Chris Bell, on the nest he had built for his concrete mate. Nigel had wooed his mate for more than two years, since his arrival on the island in late 2015. His death came just a few weeks after three other gannets were spotted frequenting the concrete gannet colony, near Nigel but not in his spot so they didn’t socialise together.

Nigel’s unrequited love and untimely death became an international story with news outlets from around the world contacting FOMI and DOC for interviews, photos and video footage. Suddenly Mana Island, Nigel, and the concrete gannet colony were in the spotlight. There was an outpouring of affection for Nigel on social media.

Nigel had poems written about him, people did drawings, wrote songs, plays and created artwork. And his concrete mate gained a name, ‘Connie’. DOC Ranger, Chris Bell, was kept very busy with telling the story to journalists, and our vice-president Linda Kerkmeester was also interviewed on BBC World Service and ABC Radio Australia talking about FOMI’s connection to the gannet colony project. 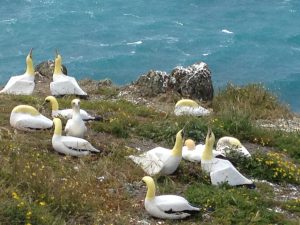 Nigel became famous, and the knock-on effect was a sharp rise in our Facebook followers, many more visits to our website, and an increased understanding of the restoration work being undertaken on Mana Island.

See short video clips of Nigel on our You Tube channel.

Read some of the international coverage in the New York Times, The Guardian, the Evening Standard, BBC News.

DOC blog about Nigel – “The gannet who stole our heart”, published on Valentine’s Day 2018.

Article about a play inspired by Nigel (and Norman), written by Washington playwright KT Peterson.

Artwork inspired by Nigel’s story, by New York artist Jae Song and created in 2020 during the COVID-19 lockdown.

Here are the poems written for Nigel …

A poem penned in honour of Nigel, the gannet, by a FOMI volunteer

You stayed awhile on Mana Island,
Attracted by your concrete mates
You built a nest, you did your best
But only Norman dropped on by.

We weeded, we painted, we sprayed guano around.
We hoped you’d find the real thing.
Three newbies arrived, a Christmas surprise,
But suddenly you are gone. 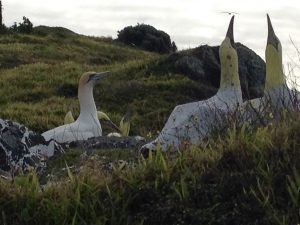 Speaking very little, avoiding the skies
Her mango sundress, easy on the eyes.
Honey homebody, did not stray far from,
The nest Nigel built of twigs, sticks and plum.

Diving deftly, the sea bears fishy fruit
Her picky palate, his gifts she refutes
Matted feathers, to fix, tussle and groom.
No other gannet sleeker, her cold, tough plumes

Sure, the other gals love to laugh and sing,
Strutting and soaring in the airy spring
While his love prefers a quiet visit
He nestles her sweetly, her love exquisite

Whenever cold, which is always the case
Whispery warm words, in each tender embrace
Ev’ry expression of emotion bestowed,
Given honest and freely, no recompense owed.

Nigel went home yesterday, he flies in
Out past the break, over the horizon.
He is survived by his immortal mate.
Connie, his concrete love, his gorgeous date.
We remember sweet Nigel, a smile and
His love will forever shape this island.

He was a seabird, this gannet, Nigel,
and here t’is his sad tale,
out to find his forever-mate –
a task for each gannet male.

On Mana Island he found her,
and so long she made him wait,
but he never did give up hope
she’d give in, soon or late.

He preened and cooed and courted,
And once almost mated,
but she stonily resisted his ardor
which continued, unabated.

The years went on like this –
he nested, wooed and tried,
but she would not take a step,
ever, to become his bride.

Other gannets came to see
Nigel, and this concrete decoy,
his passion still unrequited,
but still hoping, our gannet boy.

Some other gannets stayed on,
and Nigel hardly left her side.
Perhaps he was heartbroken,
as poor Nigel died.

Millions round the world,
obsessed with Nigel’s drive,
pray Nigel is in heaven
united with his dream bride.

On the coast of Mana Island,

Where the surfers fear to go,

In a cliff above the sea,

Lived a bird who had a beau.

On this isle of decoy gannets,

One quiet beauty caught his eye.

She was the one, this lovely bird,

Her strong grey beak raised to the sky.

Faithfully, he served her,

Plucked white plumage from his chest,

Gathered seaweed and slim twigs to

Build his love the finest nest.

Three long years he loved her so,

Fed her beaks of water cress,

Sang her songs of tenderness.

Three long years he loved her so,

Never once complaining why,

She refused to make a sound,

Kept her eye fixed to the sky.

Buzz off! he cried, don’t scare my bride.

All those years that he stood by her,

She could never love him so.

‘Tis fact: she was made of stone,

Sad, it was he did not know.

Old at last his body fading,

Laid to rest his feathered head,

Died beside his one true love,

Stony eye fixed on their bed.

Solid as a rock she perched,

On that ledge above the sea,

Where no visitors dare to go,

Cold as stone, as cold can be.