Our group of 10 volunteers made a serious dent in the bindweed/convolvulus population, particularly in the wetland and adjacent area. It was nice to have five you 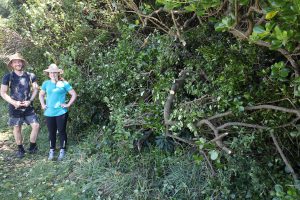 Manu and Chelsea – you can see the results of their work to clear the tree which had fallen across the track.

ng people along varying from 15-to mid 20s. All were highly motivated first timers, keen to come back. Three of these resulted from calls put out to groups like Matiu/Somes Karo Busters.

Because of the high winds forecast for later on Sunday we had to come off the island at 9am that morning. We knew the trip could be curtailed just before we left for the boat on Friday. I made the call to go. It worked out well. We started work just after 8am on Saturday and most worked until 4.30/5, some later.

Bindweed was removed, the route of the wetland track was tidied for part of its length. A pair did track clearance near the woolshed and lighthouse site (a non-bindweed option). I checked the fluttering shearwater burrows with one of the youngsters – no chicks still there.

Trent and a team of students were at house three monitoring the soft and hard release of the ngahere geckos. They were putting in long hours, day and night.

Daniel was filling in as ranger. He had been familiarised with the format we have established for these trips. He was helpful and checked in with us regularly.

As usual there was plenty of good food and a nice friendly atmosphere. Must be a record but I didn’t hear any snorers! 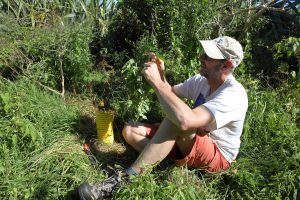 Simon untangling bindweed from a kahikatea

Key objectives of this trip were to carry out maintenance of the fluttering shearwater and fairy prion artificial burrow sites, clear convolvulus (bindweed) from the wetland, monitor the trial flax planting and review the island photo point areas. 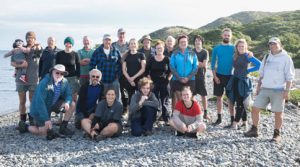 Team of volunteers with DOC rangers

Another key task was the banding of sooty shearwater chicks. This group was lead by DOC scientist Graeme Taylor. Shane Cotter and son Kieran, Leanne Leelo and Miguel were supported by FOMI volunteers Brian, Chris and Jess, Annemieke and Jozef. The past record for chicks banded was in the low 70s. A record number of 96 were banded this weekend – a combination of a good breeding season and outstanding teamwork in trying, windy conditions.

David led the maintenance work on the bird colony sites, assisted by Hannah (our very efficient volunteer officer), Richard, and Bridget. Richard Grasse lead the weeding and basic track cutting work in the wetland and later in Weta Valley. Allan and Dale assisted and were joined by the bird maintenance crew on Sunday. Allan and Dale located a number of the photo point sites on Sunday morning and took photos which will be blended to make a panorama.

While the weekend was very productive, a drama played out on Saturday. Three boatloads of Vella family descendants arrived in very windy conditions. We had concerns we may have to share our evening meal and accommodation with these visitors! However, they all made it safely back to the mainland later in the afternoon.

A very tired group of volunteers made their way back Sunday afternoon, having had a very positive experience and being keen to come back. 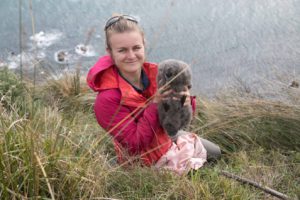 Annemieke with a sooty chick. 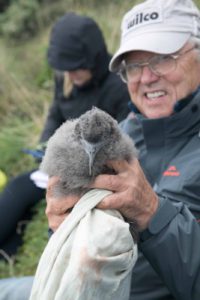 Brian with a sooty chick. 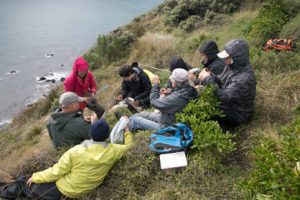 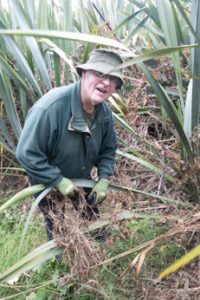 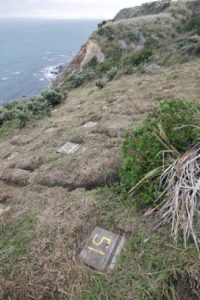